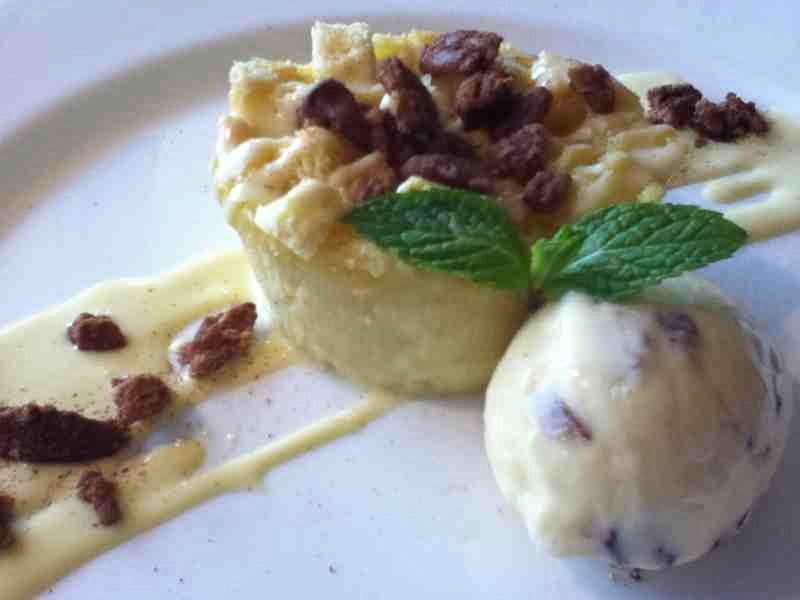 When he found himself skipping class as Iowa State University to go to his job as a country club cook, Brant Tesky realized he needed to go outside the classroom to find his calling.

Growing up in Des Moines, Iowa, Tesky was exposed to – and by Washington, D.C., standards, spoiled by – fresh ingredients early in life. “There’s nothing like fresh cream and eggs from my grandparents’ farm,” he said.

And showing up on time for 5 o’clock family dinner each night was serious business in the Tesky household. It was a ritual that instilled in him a passion for enjoying good food. Shaking his head, eyes widening, Tesky recalled his mother as a strict enforcer of the rules. “Oh no, you did not want to be late for dinner.”

So it comes as little surprise that Tesky’s upbringing led his career into the kitchen. “I started as a dishwasher,” he explained. “Then I was allowed to do cheese plates, cold platters. I worked my way up.” Before the days of the celebrity chef, this is how cooks expected to become leaders in the kitchen – through experience and paying one’s dues. As we’ve heard other chefs explain, culinary school is great to learn skills and get a “piece of paper,” but training to be a chef can only be achieved on the job.

Chef Brant said, “To be a good chef, it’s not about making a good dish. You have to manage somebody to make it 100 times” and it must be exactly like the executive chef’s version every time.

My main purpose for meeting with Tesky was to get the details about celebrating Mardi Gras Louisiana style at Acadiana.

Few Americans are as proud of their regional fare than folks from Louisiana. In part, Chef Brant thinks it’s due to the great variety of ingredients – especially proteins – available in the area. “In Cajun cooking, we use the French influence and techniques to make duck, crab, oyster, crawfish. There are great natural ingredients.”

So what’s the difference between Cajun and Creole cooking? Often, people use the terms interchangeably, but they are different cooking styles, and as such, there’s controversy among chefs about those differences. And at Acadiana – named for the French area of Louisiana – you can find both. With a twist.

Some discerning patrons look for their roux with a dark tint, but Tesky said, “I really like stuff that has a peanut-colored roux. A nutty flavor that I can use as a sauce on a fish. It’s about taking things from here and there to make a unique cuisine.” And while some customers inform Tesky that he’s not making his roux properly, “the same people keep coming back anyway.” So he must be doing something right.

And while I’m no critic and choose not to formally review restaurants, I can attest that Tesky is indeed doing lots of things right. I’m not an expert in Louisiana cooking either, but his “use what you’ve got” mentality and refusal to cook any type of crawfish but Louisiana crawfish, rings true and authentic.

Customers – many repeat ones who themselves hail from Acadiana – come for Louisiana favorites such as seafood gumbo, crawfish etouffee, jambalaya and a very special dinner menu item, grits and grillades.

Where Tesky can source ingredients from Louisiana, he does, and a great example of this is the oyster po’ boy sandwich. “If I came here to have lunch”, he said, “this is what I’d order.”  Served with Zapp’s Potato Chips from Gramercy, La., the corn flour-dredged Gulf oysters are served on classic Lindenheimer rolls with mayo, lettuce and tomato.

After snapping a photo of the sandwich, the chef offered me a taste. I paused. “I don’t like oysters,” I confessed. But I took a bite anyway. Hmm…that first oyster was pretty good. So I had to try a second one, just to see. And I was pleasantly surprised once again. I looked at the chef. “That was good.” Certain it was the raw variety that had turned me off of the nutrient-rich bivalves, Tesky called out to the kitchen for an order of charbroiled oysters, to prove me wrong in my alleged dislike of the protein.

Being wrong never tasted so darn good. Made with garlic butter and crusted with Parmesan-Romano cheese, Tesky explained that once food service begins at 2:30 each afternoon at the bar, “at least every other person will get an order of these.” Just one order? I could’ve eaten three platters of them.

A few more dishes for which Acadiana is known and which will be featured for Mardi Gras:

DISCLOSURE: Though the chef fed me and even sent me home with dinner and dessert, the gratis grub did not influence what I’ve written. But it did give me insight into his character.