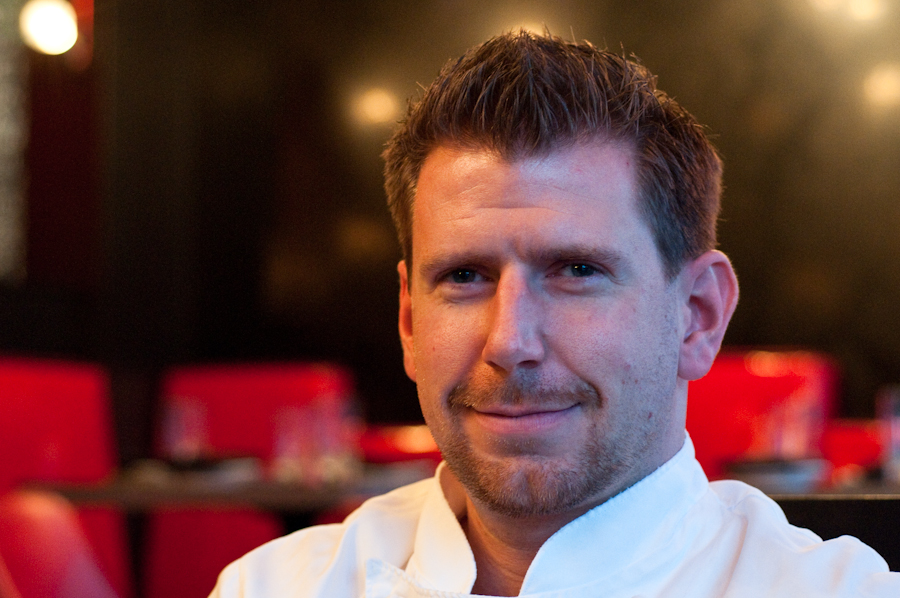 Now I have a reason to go to 14th Street. Yes, this Arlingtonian admits that she will be so bold as to venture – not just across The River – but to a locale that is Green Line-accessible. Of course, it’s for a good cause – a delicious meal.

Three nights each week, there’s a party upstairs in the spacious lounge area – with outdoor space in fair weather – but Policy is a restaurant first. Since my bedtime is probably before the party begins, I was really interested in the food, served in a mod-meets-retro diner dining room. Oh, they had me at “hello” with the slick red vinyl booths and tabletops made of the same boomerang Formica I’ve been eyeing for my own kitchen.

During my visit, it was noted that the dining room is the “heart” of the establishment, and it’s clear that Chef Brian Murphy puts heart and soul into his fine dishes.

Chef Brian brought out samples of several of his favorites: short ribs so tender that you can cut them with a fork, sweet potato gnocci served over goat cheese, duck three ways with foie gras, lamb sliders with mint pesto served on rolls from D.C.’s Lyon Bakery…

And the best part is, the small plates that are meant to be shared are affordable.

I took a good look at the menu before going to Policy, and frankly, I did not expect such well-crafted dishes in the hip and casual setting. Once Brian and I got talking, all of the pieces started coming together.

As one of six boys growing up, dinner was a big deal at the Murphys’. Once Brian’s older brothers started moving out to go to college, his mother went back to work and would leave recipes on the counter, along with ingredients, for the younger boys to prepare. It was because of this influence that “in high school I discovered my passion and talent for cooking,” Murphy said.

Though Brian was encouraged – even expected – to pursue a four-year bachelor’s degree, he decided that culinary school was where he could learn technique and nurture his talent.  He learned that “culinary school is great for a piece of paper, but you have to work for top chefs” to really learn the trade. His first gig was as a “commis,” an apprentice cook, at the esteemed L’Auberge Chez Francois in Great Falls, Virginia.

Today you’ll find Chef Murphy following the lead of his previous employers, always hands-on, always in the kitchen. He will soon take his first vacation since opening Policy nearly two years ago.

“My background is in French cuisine and classical technique…but ours is a global-inspired menu, with Indian, Asian and Latin ingredients,” he explained. Murphy and his staff make everything from scratch and use every bit of food that comes into the kitchen. “We’re always making stock. We use everything, even mushroom stems.”

Murphy’s purveyors are a closely guarded secret. A chef is only as good as his raw ingredients, and there are a few sources for produce he does not want to share with other area chefs who also seek out local, high-quality ingredients. That’s the artisanal nature of how Murphy cooks. “I want that one supplier who no one else has,” he said.

Chef Brian’s style is to use “upscale, five-star ingredients” served as small plates. But these aren’t tapas-sized “small plates,” these are hearty small plates. Two or three dishes per person shared with a group are plenty.  I guarantee that the chef – who cares so much about his craft that he checks every plate before it’s sent to the dishwasher to see if it’s been picked clean or if certain ingredients were not eaten – will not let you go home hungry. I very nearly had to be rolled out of the door myself.

At some point, I think I lost count of the number of dishes that came out, but they were all so delicious, I’m able to recall the taste and texture that made each of them stand out. Many dishes are reasonably priced around $12, so dinner out with friends will fill you up without draining your wallet. Here are a few standout dishes:

–       Hand Cut French Fries ($6) – Idaho’s Winnemucca potatoes are hand sliced and fried three times before coming to your table with a side of garlic and black truffle mayo. Chef Brian’s quest for the best crunchy fries led him to create his own. How could anything fried three times be bad?

–       Salt Roasted Beets ($8) – Have I mentioned before that I “hate” beets? Well, I hate beets as much as I hate olives, apparently, as I went back for seconds of this salad. The golden beets were milder in flavor than the darker varieties and it was well balanced with a brilliant pistachio pesto. It’s a signature dish made with Path Valley Co-Op beets from Pennsylvania, and one I suggest you try.

–       Braised and Grilled Short Ribs ($12) – This is a rich piece of meat that Murphy balances with house-made pickles and pickled peppers. I was impressed with the tenderness of the meat; I hardly needed a knife to slice into it.

–       Madras Curry Lamb Sliders ($10) – Served with melted Gorgonzola cheese and mint pesto, they are very juicy and a unique take on sliders. I heard “mint” and was instantly dubious, but after one bite I was reminded that I was in capable culinary hands.

–       Sautéed Sweet Potato Gnocci ($9) – I’ve saved my favorite for last. It reminded me of my favorite dish from Volt, a goat cheese ravioli. If I didn’t have a shred of social decency, I would’ve hoarded the gnocci from my fellow diners and eaten the whole plate on my own. The caramelized onions, spinach and goat cheese provided the perfect balance – there’s that word again – to complete the dish.

If you go to Policy only to dance and drink, you’re missing out on a delightful culinary experience. And if you haven’t tried Policy yet, what are you waiting for?

DISCLOSURE: I enjoyed these dishes on the house during the interview. But I can’t wait to go back with friends – as a paying customer.