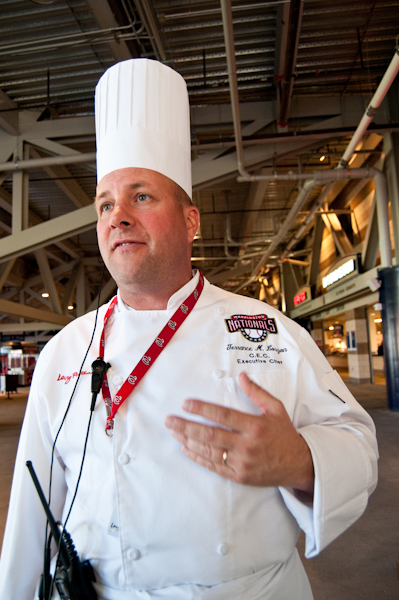 Nationals Park Executive Chef Terry Louzon gave us a behind-the-scenes tour of food operations at the stadium. For more photos from the interview, visit http://staceyviera.zenfolio.com/nationalsparkchefinterview

Growing up watching the O’s with a hot dog in hand at Baltimore’s Memorial Stadium (R.I.P.), our younger selves never would’ve dreamed about the endless food possibilities that the ballpark would offer just a couple of decades later. But Nationals Park Executive Chef Terry Louzon showed us last week that ballpark fare goes way beyond burgers, beer and brats.

Nationally known for their service at entertainment venues, Levy Restaurants is the company behind the dining and foodservice operation at the park. Chef Terry’s creativity and knowledge – he’s a retired Army master sergeant – combined with Levy’s innovation, make for a great ballpark eating experience.

Not to overstate the obvious, but…come to the ballpark hungry! You’ll find your typical ballpark fare, as well as many unexpected offerings, such as the Turkey Cobb Salad with Honey Dijon dressing and the Southwest Steak Salad with Chipotle Ranch. Both salads are Chef Terry’s creation, and are available at the Red Porch Restaurant. Anyone who has a ticket to the game can make a reservation at the Red Porch, just inside the Centerfield Entrance, the most commonly used entrance due to its proximity to the Navy Yard Metro Station.

While salads may not seem like standard game day eats, Chef Terry and the Levy team have seen demand for healthier offerings, many suggestions coming from season ticket holders. “We get emails from people asking for specific items. We get requests for healthy vegetarian items. We created a veggie burger.”

The chef showed us a veggie burger. Samantha was into it and dug right in. Stacey was skeptical. A burger with no cow? No thanks. But in the interest of being open-minded, she also tried the black bean and beet burger with brown rice, Levy barbecue sauce, and a dash of cumin on a whole wheat bun. Holy cow – pun intended! – what a delicious burger! It’s so flavorful that you forget there’s no meat.

For those looking for alternatives to a burger or dog, note the vegetarian options, including the hearty veggie burger and a grilled portabella sandwich with a creamy goat cheese spread. For even more selections, try The Healthy Plate cart, located in the very popular Section 110. Within the busiest section of the ballpark, you’ll find homemade hummus with pita chips, yogurt parfaits with fresh fruit and granola, wraps, and salads.  There’s even gluten-free beer. As Chef Terry mentioned, “Some people come to indulge in food. We also provide healthy options.”

“When we know something is popular, as a general rule, food is trendy and we share that information with regional and corporate chefs.” Levy Restaurants uses the Mindshare system to acquire guest ideas for dishes in the off-season and incorporate items that will create a “wow effect” among fans. At Levy’s home office in Chicago, a team of chefs is hard at work in an Innovations Kitchen, creating ideas for their various venues. “Every season we get new ideas.”

Levy is experienced in meeting customer demand, and this allows Chef Terry and his dining team to use their talents in ways that best suit Nationals customers. The fit seems ideal for Chef Terry and his background. Following his Army career, he pursued culinary arts, becoming certified with the American Culinary Federation. “The Army doesn’t produce gourmet chefs, its mission is to support the troops. I had an interest in food, and after 15 years in the Army, chef was the natural [job] to pursue after I left in 2000.”

Though he now leads troops of chefs instead of soldiers, Louzon enjoys providing thousands of meals for fans every day. “I’m proud of what we do. It’s a big responsibility, and I have five sous chefs to help run operations. We’re in our second season at Nationals Park.”

When the Nationals are on the road, Chef Terry and the dining team stay busy, striving to exceed customer expectations with food quality and service. The ballpark also offers banquet facilities, catering and private parties. “We’re busy in a different way during the away games.”

With 81 of the 162 games of the regular season played at Nationals Park, how do Louzon, his five sous chefs and hundreds of other cooks and food purveyors put on their game day game face?

“We work 12- to 14-hour days. The gates open at 4:30 p.m.,” Louzon said, which is the time at which the Red Porch offers its first seating. The stands open at center field so that fans can watch batting practice. The rest of the park opens at 5:30.

On game day, most chefs arrive around 10:30 a.m., but others come in earlier to get ready for the fans.

As we mentioned the recent major-league debut of Stephen Strasburg, Chef Louzon noted, “When the team is better, we’re busier.” But other factors impact attendance. “We have a core set of Nationals fans, and when the Mets, Phillies or Baltimore are in town, attendance is up.”

So when the team is playing well, where’s the downside? Laughing, Chef Louzon joked, “Strasburg is bad for concession sales. Last call is earlier if he pitches well.”

Tune in Thursday to read about premium dining experiences at Nationals Park, including the Farm to Fork table in the swanky Lexus Presidents Club and more! For more photos from the interview, visit http://staceyviera.zenfolio.com/nationalsparkchefinterview