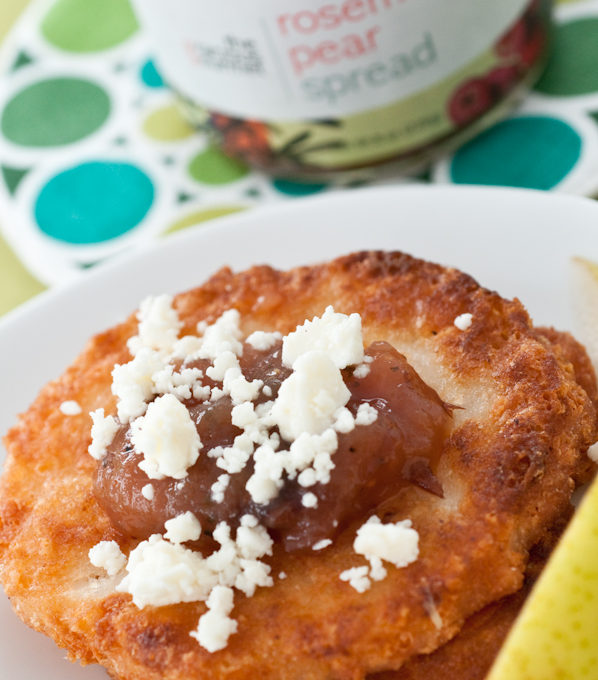 You know when you’re craving something fried and crunchy? Thinking back to a trip to Colombia a couple of years ago, I got a craving a few weeks ago for crispy arepas. Arepas are South American cornmeal cakes, usually fried and usually made with cheese. And almost always served on the side with calentado. I made them from scratch once with the intention of posting the recipe on Every Food Fits, but the recipe wasn’t quite right. When the craving hit, I tried again, and this time I

had something delicious to add as a topping.

The recipe used last time was from My Colombian Recipes. The recipe below is similar and modified it a bit, as initially, there was not enough salt to make the arepas as flavorful as they could be.

Mix 1 cup masarepa with 1 cup shredded mozzarella cheese, 1 teaspoon kosher salt and 1 ¼ cups water. Stir until incorporated and let stand for a few minutes until it forms a dough. If the dough is too crumbly, add a little more water – but only a little at a time! While the dough stiffens, heat canola or vegetable oil in a skillet. Form a ball with a piece of dough and flatten in your palm before putting it in the skillet to fry. Use a skillet big enough so that you can make at least a couple of arepas at a time. Fry on each side about 4 minutes or until that side becomes brown and crisp.

The key to enjoying a fried arepa is: drain, blot, and blot some more. Get as much excess oil off of each arepa or it will taste too greasy.

The Gracious Gourmet sent a couple of samples of spreads, and the Rosemary Pear Spread sounded like it would be a stellar addition to the arepas. With goat cheese on top and a sliced pear, it was delicious!

The Rosemary Pear Spread is versatile and a crowd-pleaser. With water crackers, a 5-year-old neighbor couldn’t get enough of the flavorful and unique condiment. The rosemary is noticeable, but not overly so, and the pear is subtle and not too sweet. Great balance of flavor and texture. We enjoyed it both at room temperature and straight from the refrigerator and found that chilling it enhances the experience.

What are your favorite fried foods? Do you modify fried recipes to make them healthier at home?