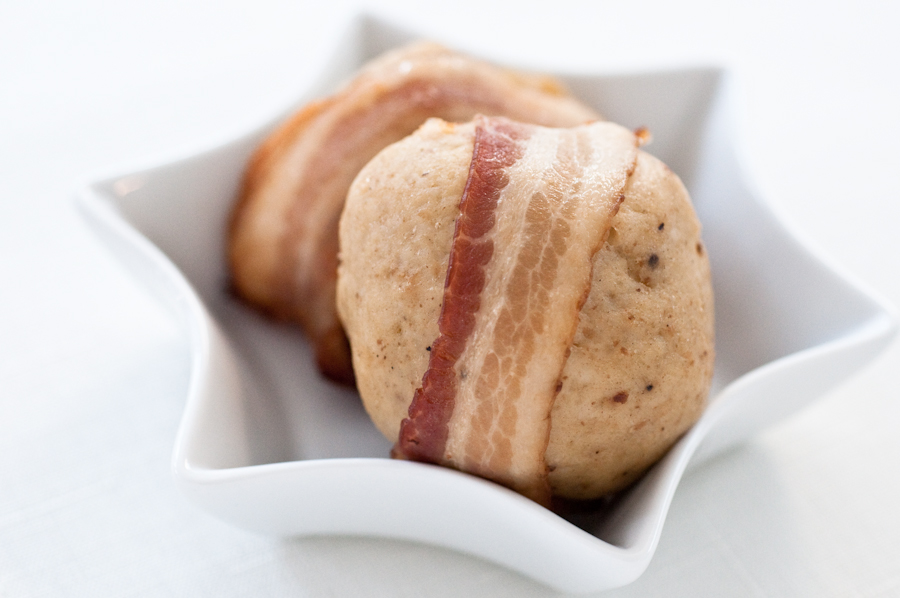 “Oy! The delicious sacrilege!” Stacey exclaimed to her Facebook friends when she posted a photo of bacon-wrapped matzo balls she made last month.

It’s the kind of dish that is so wrong that it’s right. The brainchild of Top Chef star Ilan Hall, we’d heard about this recipe a while ago, but worried about the implications that making it might have on our souls. Eh. We’ll worry about eternal damnation some other time… Right now, let’s focus on the recipe.

We use a very simple one:

Mix 2 Tbsp. schmaltz/fat (ask the butcher, or use vegetable oil if you can’t find schmaltz, though your matzo balls will not be as fluffy inside with oil) with 2 lightly beaten eggs. Add ½ cup matzo meal and 1 tsp. salt. When well blended, add 2 Tbsp. soup stock or water. Cover and refrigerate at least half an hour. In a 3 qt. pot, bring salted water to a boil. Reduce heat so that water is bubbling. Wet hands and form golf ball-sized matzo balls and gently drop into water. Yields about six balls of this size. Cover and boil 30 to 40 minutes until fluffy and matzo balls rise to top of water. You can either add them to warm soup or…

After boiling the matzo balls, wrap each in a strip of bacon (we prefer the flavor of uncured bacon) and place it seam-side down on a foil-covered baking sheet. If the idea of wrapping a matzo ball in pork bacon just doesn’t jive with your dietary tendencies, go ahead and substitute for “turkey bacon.”  Roast in a 400-degree oven for about 15-20 minutes, until the bacon is to desired crispiness.

NPR highlighted a bacon-matzo ball recipe – enough to feed an army! – and Hall’s restaurant in a recent broadcast.

Another possible sacrilege is promoting bacon on a blog focused on healthful eating. But don’t judge us so soon on that one. It seems bacon is a favorite (nearly) sinful indulgence for many of us. Keeping it in perspective is what’s important. Enjoy bacon in moderation as you would other fat sources. Yes, we know it’s hard. Some of the lower fat bacon options are worth a try, but may sacrifice taste and/or texture. Beware of sodium, too, as some brands of turkey bacon and lower fat varieties are higher compared with the standard. There is a tendency to eat more when we know something is lower in calories or fat, so there are instances when enjoying the real deal is worthwhile.