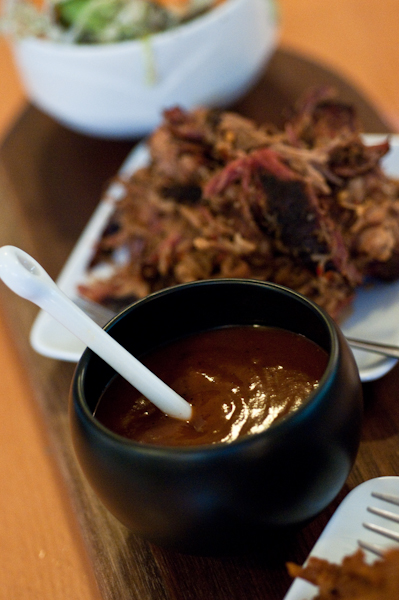 For more photos from the interview, visit http://staceyviera.zenfolio.com/smokinsomethinchefinterview

My name is Stacey Viera and I enjoy vegan barbecue.

There, I said it. I’m a sworn carnivore. I turn up my nose as the slightest mention of tofu. If it doesn’t have meat, I’m not interested. Until a chef offers me vegan barbecue. What am I supposed to say? “Chef, are you smokin’ somethin’?!”

When James Main and Erich Zimmermann offered me vegan barbecue, I knew that they were obviously Smokin’ Somethin’. No, that’s not an insult. Far from it! The chefs behind Smokin’ Somethin’ BBQ offer Washingtonians classic, succulent barbecue with innovative twists.

Main, who also runs a personal chef business, met Zimmermann, a resident of Washington’s Shaw neighborhood, through Zimmermann’s wife, who is from Main’s hometown in Massachusetts. Got that?

You’ll want to meet Main and Zimmermann, too, and guess what! You’re in luck. Find them this Friday, August 6, at Arlington’s Westover Market where local band Starryville will play from 6 to 10 p.m. There’s an outdoor, six-tap bar with a great variety of brews. It’s a family-friendly event, but according to the woman with the market who I spoke to over the phone, “someone complained” about dogs at the outdoor event, so be sure to leave your pup at home.

Main said they’ll have “enough to feed a couple hundred people.” He and Zimmermann are pros when it comes to having enough food for everyone, as they just finished a 12-week run with the NoMa Summer Screen, a “free, weekly outdoor film series” near New York Avenue Metro Station. They also offer catering services for corporate events and small weddings.

Which brings us to the topic of mobility. Wouldn’t it be great to have, say, a souped-up truck that the Smokin’ Somethin’ chefs could use to drive their tasty barbecue around the D.C. area?

“We want a truck,” Main said, visibly excited about the idea. “We could also do retail [for our rubs and sauce]. The mobility would be huge.”

Well, if you have a few thousand bucks and believe in the awesome power of Main and Zimmermann’s cooking, you might be able to own a piece of Washington barbecue history. Smokin’ Somethin’ can’t hit the road until they get a few folks to invest in their startup.

Zimmermann, a George Washington University graduate, noted, “D.C. is a truck-friendly city. We could start in Washington or Virginia,” whichever locality would provide the permits more quickly is where they would begin. “D.C. would be happy to take on good barbecue. There’s room for more.” Zimmermann and Main are hoping to launch their truck by spring 2011.

So back to the idea of vegan barbecue. I could hear imaginary vegetarians rejoicing, whilst my heart was sinking. I wondered to myself, Is nothing sacred?! But instead of pooh-poohing seitan, I gave it a try. Honestly, it ain’t chicken. But, as Zimmermann eloquently summed up, “With our sauce on it, it’s bound to be pretty good.”

And good it is. As is the coleslaw. Not a fan of the goopy, schmaltzy, runny mishmash of cabbage and mayo one typically finds plopped on the plate at lesser establishments, the Smokin’ Somethin’ coleslaw was light and tasty. Made with shredded cabbage, carrots, sugar, salt, celery seed and vinegar, I tried it, thinking, “This is what I’ve always wanted coleslaw to taste like.”

A sandwich will run you $5. Add beans and slaw for a total of $8. Or try a unique BBQ Sundae – an $8 offering layered thus so, from the bottom up: coleslaw, beans, and meat/seitan. A beer in one hand, BBQ Sundae in the other. Sounds like the perfect meal on a hot summer night.

Can’t make it out on Friday to the Westover Market in Arlington? Smokin’ Somethin’ said they also plan to offer dishes at the Capitol Riverfront Business Improvement District’s August 11 grand opening of The Yards Park as well as the August 13-15 COF-A-Cue charity event.  At COF-A-Cue, Smokin’ Somethin’ will be defending the titles they won last year for first place in both the chicken and pork categories.

The idea of taking a cut of meat and making something outstanding is what appeals to Zimmermann. He claims it’s “hard to make brisket taste really good,” though I pointed out that at 95, my Big Mama Tillie still makes one mean, tender brisket. But it’s true. If you don’t cook brisket on low heat for a long time, you’ll end up with a tough piece of beef.

Zimmermann and Main should indeed be proud that they placed 10th last year in the brisket category at the Battle of the BBQ Brethren. “A well-seasoned brisket smoked for 12 hours. There’s nothing like it.”