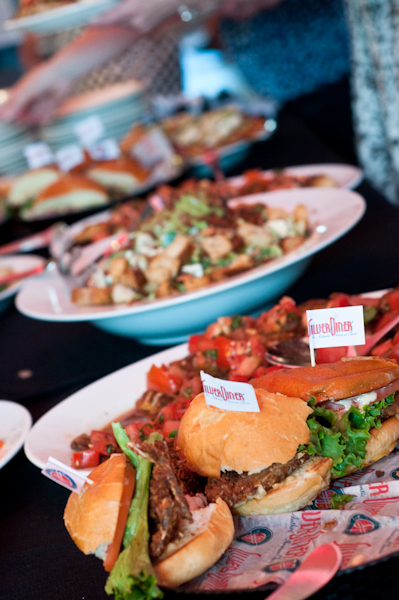 So you’ve read the story about how the Silver Diner has changed their menus, supply chain, business model and invested hundreds of thousands of dollars to do it.

Following the Blogger Tasting Night, it was surprising to hear that there would be another and doubted we would attend. But then the Silver Diner said there would be an announcement about the kids menu and a new initiative tied to the Let’s Move! campaign. Since this blog is focused on nutrition and health, we decided to hear what owners Robert Giaimo and Ype Von Hengst had planned for the new menu.

And we were thrilled by their innovative idea for the “Eat Well, Do Well” program.

As Giaimo said, “Eat Well, Do Well” is more than a loyalty program. “You can link your card to a local school,” he said.

As a local Washingtonian, Stacey was reminded of the local Giant Food stores she grew up with – not the one we know today that’s run by Ahold.  You remember it, don’t you? The one that cared about value and quality, and the face of which was Odonna Matthews.  The Giant we grew up with had scrip programs that allowed shoppers to donate a portion of purchases to specific schools.  Now they have a program called A+ Bonus Bucks, which operates much like scrip.

“It’s a combination of Giant scrip and Harris Teeter loyalty programs,” Giaimo explained. “But the funding is earmarked for nutrition.”

Bonus programs often allow the schools to use the funds to purchase whatever they wish, but Giaimo didn’t want their efforts to go toward purchasing loose-leaf binders. That would defeat the purpose of what they’re doing to raise the nutritional bar in area schools. Ah, music to a dietitian’s ears!

At last week’s event, we got a glimpse into the lengths to which the team has gone to establish a successful program. Giaimo said, “We did focus groups and surveys. Fresh and local is what we honed in on.”

As part of a larger plan, the Silver Diner has established relationships with Action for Healthy Kids, a nutrition-focused non-profit organization, and the “head of nutrition and health departments of Virginia worked with the Silver Diner to create the menu.”

Giaimo has lofty goals for the diner’s public-private partnerships, indicating that this is the “program that could change school funding in America by getting restaurants and schools in partnership.”

Initially, they looked at the 170 schools within a five-mile ring of the restaurants. At participating schools – perhaps 60 to 80 initially – the “principal and PTA leader sign a statement that they are committed to the program. They attend orientation for school representatives and a receive a $500 check” that will go toward Farm to School Week in Maryland and Virginia, which will get more fresh foods into the schools and “into the kids’ mouths.”

Giaimo confirmed that they are holding a June 22 press conference with Virginia’s first lady, Maureen McDonnell and is confident that America’s First Lady Michelle Obama will also be directly involved with the “Eat Well, Do Well” initiative as it’s tied to her goals for the government-sponsored Let’s Move! program.

Von Hengst, Giaimo’s business partner for the past 26 years and the chef leading the menu changes, said that in the few months since the initial rollout of the new menu, the “reaction has been overwhelming. I’ve gotten hugs and kissed from guests…who are happy about what we’re doing.”

But Von Hengst noted the challenges of the “journey” that he and Giaimo are on to bring fresh and local food to their “next generation” diner. “It’s going to take one farm at a time and one restaurant at a time to make these big changes. I’m contacting local farmers to get the best food. Ralph at Black Eagle Farm calls to talk about his 100% grass-fed beef.” The farmer and chef speak directly to communicate restaurant needs and ensure the farmer’s supply can meet Silver Diner’s demand.

As supporters of Silver Diner’s new initiative, we hope others also see their efforts as worthwhile. We predict that more and more restaurants will adopt similar programs as interest in both sustainable food and school nutrition increases. And for all the parents who are often discouraged by selections on the kids’ menu, take note: Silver Diner has some pretty fabulous choices. Among them: steamed edamame, vegan coleslaw, whole wheat spaghetti, black bean veggie sliders, and a peachy blue yogurt shake for dessert. Yum!