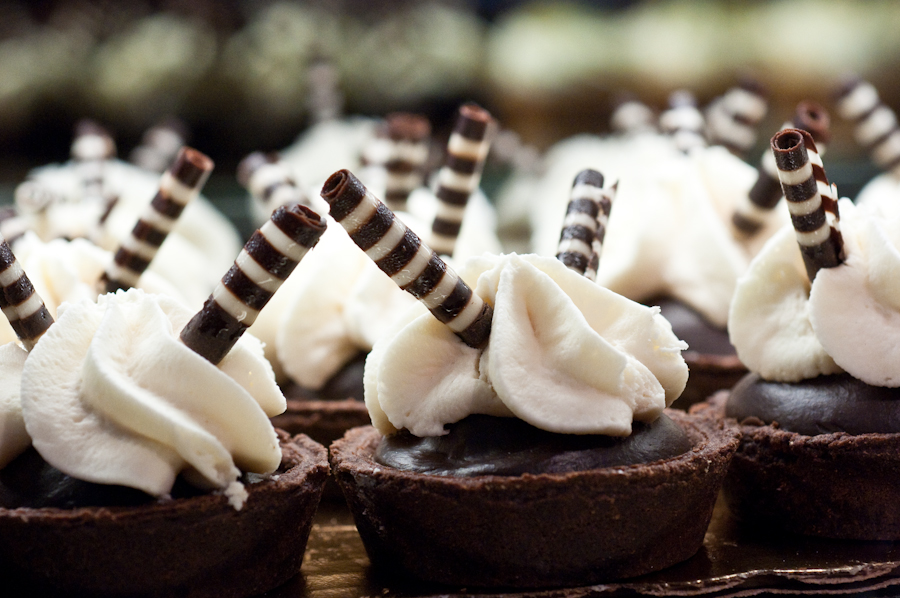 This is the first post in a series with Michael Kiss. In future posts, he’ll take you through each department in the store to learn how to shop like a chef. For more photos from the interview, visit http://staceyviera.zenfolio.com/wholefoodschefinterview

We’ve all threatened to just quit our jobs and do something fun, like work at the grocery store handing out samples of cheese. (Or in my case, quit a job to become a food photographer.) Chef Michael Kiss dared to leave his traditional kitchen gig more than five years ago and, through his “friend named serendipity,” found his calling.

Originally from Western Pennsylvania, Kiss grew up watching cooking programs. One of his first culinary experiences was at the age of 8 or 9, he said, and it involved his mother’s blender and good intentions to make pasta sauce. He smiled, “I learned some lessons from that about cleaning up a mess in the kitchen.”

Undeterred by unsuccessful attempts, Kiss continued to cook – often with his mother – and attended the Pennsylvania Culinary Institute in Pittsburgh (now Le Cordon Bleu Institute of Culinary Arts). Kiss said it was a “classic cooking school, we used lots of cream and butter.”

His traditional education led him to Chicago, where he did a one-year externship, working for the “Gordon-Ramsay-angry-chef personalities” in high-end kitchens. Reflecting on his early kitchen experiences, Kiss said, “I learned the secrets of the trade, amazing skills from amazing chefs, but it was a negative environment. I burned out.”

For the next four years, Kiss lived in Georgia, working as a chef and teaching cooking classes at a cookware shop, a job that he loved. When his wife’s career moved them to Washington, D.C., Kiss took it as an opportunity to change his career.

“I was angry, and I didn’t like it.” Kiss said.  He decided to leave the über-competitive kitchen environment and get a fun job where he could “play with food.”

Having worked with domestic artisan cheeses as they were gaining popularity at the turn of this century, he took his new positive attitude to the cheese counter at the Silver Spring, Md., Whole Foods Market. “I went from executive chef in a restaurant to a $7-an-hour job in the cheese department.”

Over the next five years, Kiss moved up the ranks within Whole Foods, moved to the Arlington, Va., store, and eventually, the Store Chef position was created for him. “When you have a passion,” Kiss said, “you find a way to do it.”

As Store Chef, Kiss is a liaison between the food and the customer. “We are fortunate that we have our store right in the middle of one of the healthiest places in our country. These folks know how to eat for the most part, but they need help with cooking.”

Kiss produces cooking classes, coordinates in-store events such as the weekly “Foodie Call” that involves each department in a variety of cooking demonstrations, and even works the meat and seafood counters during major holidays. During Thanksgiving, Christmas, and at other times of year, Kiss interacts with at least 100 customers a day, teaching them how to roast a turkey or bake a ham. “I don’t get tired of answering the questions over and over, I just get a kick out of it.”

Nearly every Tuesday at 7 p.m. at 2700 Wilson Blvd., Kiss teaches basic cooking classes on the store’s second floor, such as “29 ½ Minute Meals,” “Cook Like a Chef” and others to help new cooks get comfortable with meal preparation while providing tips for the seasoned home cook, too. “I used to write more complicated classes, but those were more intimidating. I teach the simple ABCs of cooking for people who need inspiration.”

Tune in tomorrow for the exciting conclusion to the interview with Chef Michael Kiss who will teach you tips to food shop like a chef! To view more photos from the interview, visit http://staceyviera.zenfolio.com/wholefoodschefinterview