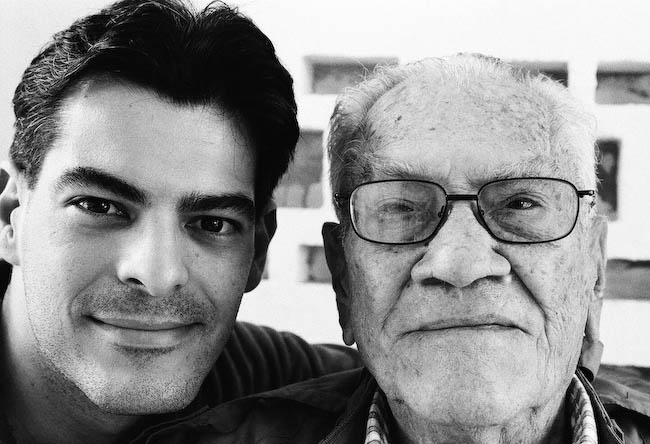 At one point during my meal at Cuba Libre last Friday evening, I thought to myself, “¡Coño! I’m not even going to bother cooking Cuban anymore, I’m just going to eat here.”

That says a lot coming from a home cook whose husband is half Cuban. I promise I’ll get back to the food in a second, but let me explain my excitement for the opening of a new authentic Cuban restaurant.

Before meeting my husband, Luis, I knew perhaps three words in Spanish, and I didn’t really care to learn more. But when you get serious with a guy whose first language isn’t English, it certainly motivates you to learn (if no other reason than to understand what he’s saying on the phone to his parents when he calls home each Sunday).

But then I met Abuelo Fulgencio, Luis’ maternal grandfather. I learned Spanish so that I could communicate with Abuelo Fune, who despite living in Miami for three years before he settled in Puerto Rico, never learned a single word in English.  Luis would translate stories of how Abuelo sent his family away and himself fled Cuba following Fidel Castro’s takeover of the island. He lost all of the land he owned, and more importantly, the life that several generations of his family built in Cuba. After a couple of years, my Spanish improved, and we could speak directly to each other.

Much of the time that Abuelo and I spent together was enjoyed over food, always the same meal – pernil, yuca al mojo, habichuelas negras de Titi Eloisa, tres leches cake. We enjoyed all of these dishes the last time we ate together, at his 100th birthday celebration.  This is the Cuban food I know, love and that which holds special meaning for me.

So when I heard about a traditional Cuban restaurant that is the fourth location for a chain, I was skeptical. Could anyone’s habichuelas be as delicious as Titi Elo’s? (I know mine aren’t.)  Can any chef hold a candle to Mami Vivian’s tres leches?

When I experienced Chef-Partner Guillermo Pernot’s tasting menu, I stopped comparing the food to what I know and enjoyed it for what it is. And it is exquisite.

We began with what might be the very best dishes on the entire menu, tres ceviches. The salmon and orange ceviche was fruity and fresh, with a texture of partially cooked sashimi. While I usually shy away from salmon caviar, I know that each element of a dish is on the plate for a reason, so I gave it a try. The gentle “pop” of the caviar accented the dish and set the stage for the rest of the menu, which if I could use one word to name it, I’d call it “texture.”

The poached shrimp of the Camarones Ecuatorianos was spicy, served with popcorn, and one of my favorite dishes. Chef Pernot noted that it is traditional to serve shrimp with corn nuts, though I had never enjoyed this combination before.

The perfect melding of flavor and texture was found in the Carne de Cangrejo, a delicious combination of delicate crab meat, smoked cheddar cheese, tomatillos and crunchy candied peanut salsa.

Friday night was also the first time I dared to eat guacamole straight out of the dish, with a spoon. I feel kind of uncouth admitting that after the first few bites, I ditched the house-made plantain chips and just went straight for the guac. Made with golden pineapple and lime juice, you must love citrus to enjoy the guacamole. It appears chunky, but just melts in your mouth.

Also delicious with the plantain, yuca and malanga chips was the hummus made from black beans (habichuelas, if you’re Puerto Rican; frijoles, if you’re from other Latin nations), which I noted to Luis was “hummus with depth of flavor.”

But the indicator of a truly excellent dish for me is if I try to figure out how to make it at home later. That’s how I felt about the “forbidden” black rice in the Paella Nueva. It has a creamy mouthfeel, very different from your garden-variety white rice. Following the paella, we enjoyed lechón so tender it fell off the fork. The smashed yucca and sour orange (naranja) sauce reminded me of the meals I enjoy with my family, a lovely treat as we rounded out the savory portion of the meal.

And dessert. This tres leches was made with banana and a chocolate banana mousse that, after an incredible tasting menu, I forced myself to eat because it was just that good. The server noted that they were prepared to roll me out the front door, so I tempted fate and tried the other desserts, too. The subtle sweetness of the Arroz con Leche is not to be missed, and again, it’s a wonderful lesson in how texture is used to augment flavor.

Chef Pernot uses texture in such a way that your attention is called to each element in the dish and enhances the overall flavor/texture experience. In a banh mi sandwich, you might notice the subtle texture combination of soft meat with crisp daikon radish and carrot, but it is subtle. But the way that the shrimp and popcorn ceviche worked together, it was as if the dish helped awaken new senses with every bite.

Though the décor made it feel like I was in a chain restaurant, this is NOT chain food. This is truly fine food. I don’t know many chains that bother to stock more than 70 varieties of rum and invest the time to make “duck ham,” duck meat that is cured, smoked and then thinly sliced.

Pernot himself is personable, and we enjoyed speaking with him about his food. Missing from the menu, Luis questioned him about classic Cuban congris, a red-beans-and-rice dish. For the same reason that you won’t find olives or ham in my kitchen, Pernot responded with a grin, “I don’t like it, so I don’t make it.”

I wonder what Abuelo would think of a restaurant called Cuba Libre. The food isn’t made by either of his two daughters, so he probably wouldn’t try it, but I think he’d be pleased with the idea that people who have no connection to Cuba at all are learning about the cuisine and culture of his homeland as he knew it.

As for me, I can’t wait to return to Cuba Libre for another delightful meal augmented by excellent service. In the meantime, I’ll try to perfect the habichuelas de Titi Elo and recall fine memories of enjoying them with Abuelo.

DISCLOSURE:  Cuba Libre generously treated my husband and I to dinner at the restaurant and gifted us with one of Chef Pernot’s cookbooks. In no way did their generosity influence what I have written about my experience. Also, the word ¡coño! as used in the first paragraph means “damn!” Abuelo Fune taught me that word, for better or worse, and I’d like to think that he’d laugh if he heard me use it.