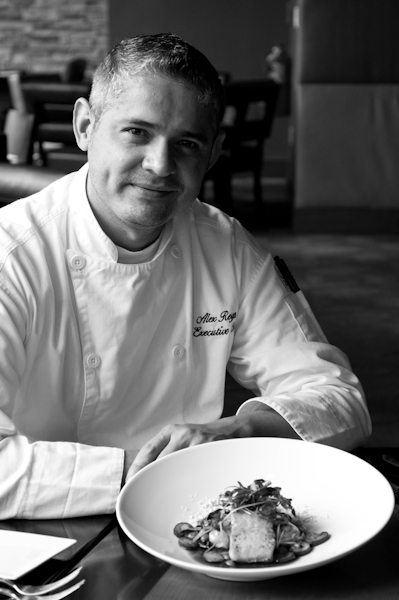 For more photos from the interview, visit http://staceyviera.zenfolio.com/chefinterviewharrystaproom

The question I love to ask chefs, “Do you get tired of cooking?” was recently met with an unexpected answer. “I get tired when I don’t cook,” Alex Reyes said, “because I don’t get to use my creativity…This is where I find myself.”

The executive chef at Arlington’s Harry’s Tap Room spends most of his time at the Clarendon location, and there’s a second location in Pentagon City Mall. Reyes, like most chefs, is an artist, and this is where the creativity comes in.

When Chef Alex gets a lamb loin, for example, he sees endless uses for each product. But in that same piece of lamb, I would see a challenge. “You have your strengths, I have my strengths,” he said, smiling.

Feeling a bit better about my occasional “recipe burnout” in my home kitchen, Chef Alex continued,” We’re not all magicians in the kitchen. Go to the library, get inspired.” He suggests finding a base, something to work from, such as one ingredient or go to restaurants to get ideas. Especially when you’re beginning to get adventurous in the kitchen, keep it simple. “Don’t play with the food too much,” he warned.

But when it comes down to it, Reyes is constantly playing with his food. Hesitating to use the phrase “molecular gastronomy,” Reyes noted that he uses techniques to create “contemporary cuisine.” Take his Chocolate Torte with Vanilla Ice Cream. He adds blackberries marinated in Grand Marnier with a chocolate “powder” sauce. That’s right: chocolate powder sauce. Using a secret process, Chef Alex magically turns melted chocolate into a delectable powder. The torte itself is flourless, made with almond powder.

Originally from Barcelona, Spain, Reyes grew up in Arlington. He received his formal culinary training at Pittsburgh’s Le Cordon Bleu, and he draws inspiration from Spanish chefs Jose Andres and Ferran Adrià.  His influences and favorite dishes, such as paella, come from La Madre Patria and incorporate Mediterranean flavors to “turn traditional dishes in to something different.”

He likes to make paella at home with local mushrooms from Tuscarora Organic Growers, Pennsylvania rabbit, rice from Spain, and other ingredients. With ingredients such as rice for paella, Chef Alex can accept no substitutes. “Certain things must be made with traditional ingredients, sometimes imported, to make the dish.”

As we chatted in Harry’s main-floor bar one afternoon, I was surprised – more like shocked – when he told me that though he was selected for an internship at El Bulli, quite possibly the best restaurant on earth, he passed on the opportunity and chose not to leave the woman who became his wife.

Some of us might scoff at this choice – I’m still kind of incredulous, to be honest – but perhaps Chef Alex is wiser than us all. The couple has been married for three years and recently welcomed their first child into the family.

Speaking of Reyes’ wisdom, he let me in on some culinary secrets. Unusual or under-utilized ingredients are favorites of Chef Alex, and he shared tips to use unique foods and cooking methods:

For a restaurant that does brisk business – they serve about 300 covers each night on weekends – Reyes and his team enjoy the work. “We have fun here. I have six cooks. I work on expediting and check each plate before it goes out. I do a line check in the morning and afternoon and taste on the line with the cooks to manage quality.”

Perfection pays off. My husband – Every Food Fits’ official food taster – and I went to Harry’s for brunch this past Sunday, a day when Reyes was out of town. The excellent quality of my French toast and hubby’s eggs Benedict proved that he runs a tight ship, and one that sails smoothly even when he’s out of the kitchen.

Ay caramba. Now that is how French toast is meant to taste.  Perhaps I should say “oy caramba,” since the main ingredient is challah, which is soaked overnight in a crème Anglaise.

While he was away the day that we came for brunch, it’s rare for Reyes to take time off, save for his once a year inspirational travels to Spain. Much of the time, he puts in 14-hour days. Could you imagine working 14 hours in your office? But Reyes said, “I have so much fun, the time flies.”

The time might fly in the kitchen, but this fall, Harry’s Tap Room is all about slow cooking. The new menu will likely debut mid-October and include more “farm direct” produce, meat and dairy products, according to Oren Molovinsky, managing partner for the restaurant. Molovinsky also helped build Farm to Table D.C., an organization that connects restaurateurs directly to farmers to establish wholesale relationships beneficial for all parties, also creating a win for the consumer.

“This supports farmers and allows them to stay on the farms,” Molovinsky said. He argued that farmers markets have their place, but they’re a huge draw on the farmer’s time/energy/money, which could be better spent building relationships with chefs who would purchase mass quantities of product.

This tactic means that Harry’s will get cuts of beef and other meat that you’re not likely to find in other restaurants. “That’s the difference between us and them,” Molovinsky noted, comparing Harry’s to the competition.

In the fall, expect to find “lots of braising meats” and “exciting new burgers,” Chef Alex said. According to Molovinsky, Harry’s will bring diners cuts such as chuck roast, which he thinks are underrated. “It’s a wonderful cut off of a well-fed, well-raised animal…It’s the most flavorful cut of meat on the grill.”

The menu will include local produce, too. “Everything is about the root vegetables in winter,” Reyes noted. Watch for turnips, parsnips and a root vegetable ratatouille.

One of the most popular dishes, pictured here in the post, is the Halibut Miso. It’s served with baby bok choy, braised mushrooms, edamame, daikon sprouts and sprinkled with his special red curry oil powder.

And be sure to try the fresh-baked biscuits and bread, served with Trickling Springs Creamery butter and strawberry preserves made in-house with apple pectin. Oftentimes, Molovinsky said, diners request to take some home in a jar. He’s this close to bottling it for sale, I can just tell. So next time you’re in the restaurant, request a jar of the preserves. It never hurts to ask.

Harry’s Tap Room is located at 2800 Clarendon Boulevard in Arlington, Virginia. Follow the restaurant on Facebook. For more photos from the interview, visit http://staceyviera.zenfolio.com/chefinterviewharrystaproom

DISCLOSURE: Harry’s Tap Room treated us to brunch on Sunday. Our delightful and knowledgeable server ignored our protestations and demands for the check. But in no way did the meal sway the opinions expressed herein.