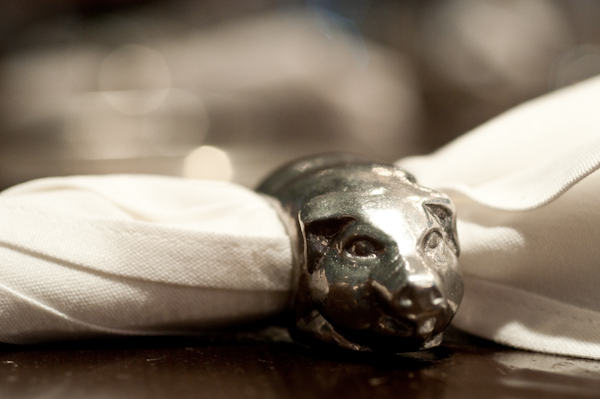 For more photos from the interview, visit http://staceyviera.zenfolio.com/dennismarronchefinterview

Chef Dennis Marron of Alexandria’s Jackson 20 at the Hotel Monaco and The Grille at Morrison House – both run by Kimpton Hotels – claims that he knows more about the human body than most chefs.

He’s probably right. “I wanted to be a gym teacher,” he said of his former career aspirations. He stopped studying physical fitness because college wasn’t a good fit for him, and instead, he enrolled at the Culinary Institute of America (CIA) in Hyde Park, NY.

When I asked Marron how he became interested in a career as a chef, he said, “I just kind of fell into it.” Growing up on the New Jersey coast, Marron took a job as a dishwasher to finance his surfing habit and make ends meet. He worked at restaurants and as a caterer throughout his teenage years and during college before deciding to ditch university study.

“CIA used to have a requirement of a minimum of three years experience in the field,” Marron noted, which is how he qualified to enter culinary school. He did his externship at a high-end, sprawling resort in Hawaii, but then returned to New Jersey when he graduated.

A family that cooks together also helped instill a love for food and meal preparation. “I enjoy cooking with soft shell crabs. Cleaned my first bushel at the age of 8. We were five kids, that’s a lot of mouths to feed. We all had to pitch in.” I got to photograph Chef Dennis cleaning soft shell crabs, and he does it lightning fast. As luck would have it, the food blog Coconut & Lime recently posted a soft shell crab cleaning primer, so you can try to clean them at home, too.

Though Marron fell into his career because of surfing, “as my job titles got bigger, I had less time to surf.” He’s very physically active throughout the day, especially at work when he makes several 4-block runs (one way, mind you) between the two kitchens he oversees for Kimpton. In addition to that, Marron said, “I ride my bike to work, walk the dogs, and feel like I can eat anything I want.”

The two-time marathon finisher, who is currently training for trail races such as the Warrior Dash in October, said all that physical activity helps burn the calories he’s consuming tasting dishes as he works during long shifts “five, six, no more than seven,” he said with a wink, “nights a week.”

When I asked if people care about where and how their meals are sourced, Marron said, “Occasionally people want to know where the food is from,” but that question isn’t asked as often as I had predicted. Sourcing is important to chefs, mainly because it’s a quality issue for them. “All my beef is from Virginia. It’s grass-fed to a certain point in its life and then grain finished to get more flavor with less fat. We work with a supplier who can even track that the mother cows were hormone-free as well. It makes things much easier for us.”

Marron noted that he sources his fish from ProFish, which instituted a Carbon FishprintÔ program so that their customers are aware of fishing methods used, where the fish comes from and other factors that Marron said helps him “use the best products and provide sustainable seafood to the customer.” Marron said that he occasionally will visit a farm, but such supplier programs save chefs the trip of going farm to farm to find the products they want to use.

Summertime is conducive to healthy eating, and Marron said, “In the summer, I do everything outside. I have a backyard garden with sage, chives, oregano, rosemary. Even peppers and some lettuce.”

Inspired by the season, he mentioned cooking techniques most commonly done outdoors and in good weather. “Slow cooking is always good. I use a lot of smoke and brine.  Flavor and richness come from smoking and slow cooking methods. Grilling is an easy way to cook without adding too much fat.”

Yes, those all sound delicious, but Jackson 20 – the restaurant in which we met – is mainly about Southern comfort food. So I had to ask him for a quick, easy fried chicken recipe. I’ve destroyed that dish before – and made one hell of a mess doing so.

Marron said that there are a few key steps to good fried chicken:

Before we began my tour of the massive hotel kitchen, Marron explained what makes it worthwhile for him to work sometimes seven days a week. “All Kimpton chefs have the same philosophy. We each run our restaurant with our individual perspective. From the back door to the front door, if you’re having fun, people will realize it. Good chefs do their own food best, and Kimpton lets us do that.”