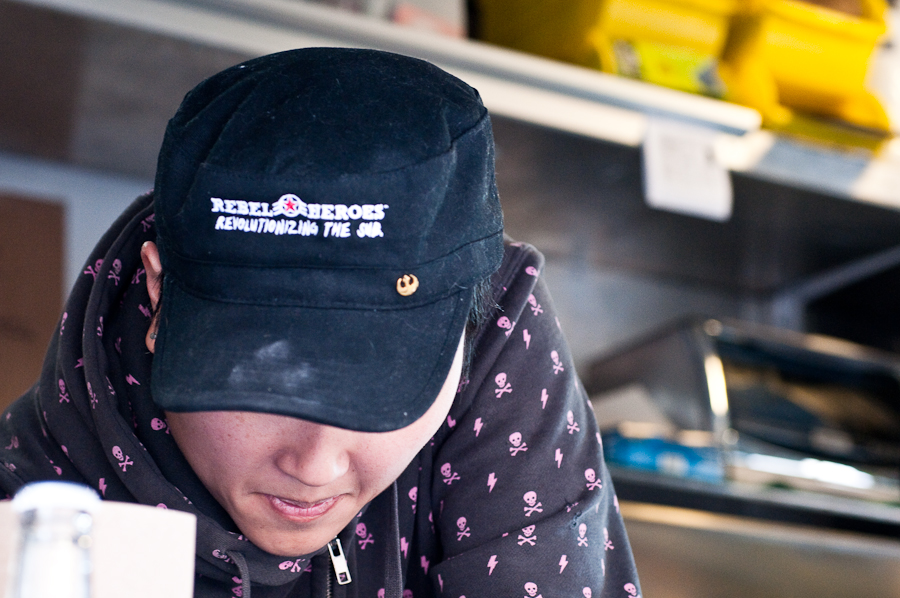 “@rebelheroes : Hi! I’m a food blogger in Court House. Could I visit w/you for a profile piece on my blog?”

“@staceyviera hi there, totally come by! Try and get here before 11 and we might get a chance to chat but it gets crazy sometimes. 🙂 tan”

Thus began my interview – over Twitter – with Tan Nguyen, co-founder of Rebel Heroes, her new food truck concept where the worlds of Vietnamese bánh mì and Cuban flavors collide.

The twentysomething food truck commander-in-chief and “Army brat” said that she played with the word “hero” and the idea that the brand-new company would be “revolutionizing the sub.”

Nguyen said Rebel Heroes – currently in its third week in selling sandwiches to the masses – provides a “good, affordable meal option. The Vietnamese baguette is the vehicle for all of the sandwiches. There’s an overlap in agricultural products with use of cilantro, rice, jalapeños, and more in Latin and Asian fare.”

All of the toppings are prepared fresh each morning, such as pickled daikon radish with carrots. Mayonnaise is a staple in bánh mì. Rebel Heroes offers three flavors: Sriracha “Rebel” Mayo, Chipotle Mayo and Lime Mayo. Nguyen is keeping Rebel Heroes’ bread source under wraps, just as another trade secret is the seasoning of the meat.

“Taste testing the recipes for a couple of years” is what it took for Tan Nguyen and her mother, Ninh, to get the sandwiches ready for their public debut. Ninh is the “chef de amazing pork and chicken.”  Well, that’s how I think of that talented woman, anyway. She prepares the meat a couple of times each week in culinary rental space called Open Kitchen in Falls Church, Va. The roasted pork, grilled chicken and pork meatballs are then loaded with the other ingredients onto the truck where the sandwiches are made-to-order.

“Mom is a great cook,” Nguyen told me. Hello, understatement! For the bargain price of 11 bucks, this writer got a Cubano (#5) and a mild version of the Macho Meatball (#7) that exploded with flavor. They were so delicious in fact, they spurred this Tweet: “Almost scarfed down two entire @rebelheroes sandwiches. Ate 1/2 of each.” Ninh Nguyen, you’re my hero. (C’mon, people, you knew that pun was inevitable.)

While this writer is a huge fan of beefy protein, Tan pointed out that the vegetarian options are “awesome.” Of 10 sandwiches on the menu, three are veggie-friendly, such as the Tofu Bánh Mì (#4), Eggs de Resistance (#9) and Tofu Libre (#10). Pressed is an option for any sandwich, just ask to make it “Cubanoed.”

As far as nutrition, the fact that the elements of each sandwich are from scratch makes Rebel Heroes a good choice. And with each sandwich made on the spot, you can ask them to go light on the mayo or make other substitutions. If you’re there to splurge, try the Vietnamese Coffee, a drip brew of Café Du Monde chicory coffee with 1 tablespoon of sweetened condensed milk, served hot or iced.

Nguyen, a graphic designer by trade, noted that running a food truck is an affordable way to start a food business. “It’s exciting. Space and power are big challenges,” she said, careful not to bump into her two food truck cohorts. “The first week, the toaster was going haywire,” sapping energy from other truck functions.

Our heroes have Arlington County, Va., permits, and they’re working with the D.C. government to operate in Washington. You’ll find them parked in metered spaces in Crystal City, Clarendon, Court House, and other Arlington locations between the hours of roughly 10:30 a.m. to 2:30 p.m. Monday through Friday. The rush is usually between 11 and 2, and they serve 80-100 people each day.

But how on earth does one track down this roving band of sandwich revolutionaries? Follow them on Facebook, Twitter or the website that Nguyen designed for the fledgling sandwich biz. Is the future of food about Tweeting chefs and food business owners to find out where to get great chow? In the case of Rebel Heroes, if you’re not following them, you’re missing a deliciously innovative meal.

Tan Nguyen and her team are open to suggestions for other Latin/Asian combos. Do you have new sandwich ideas? Share them in the comments section!