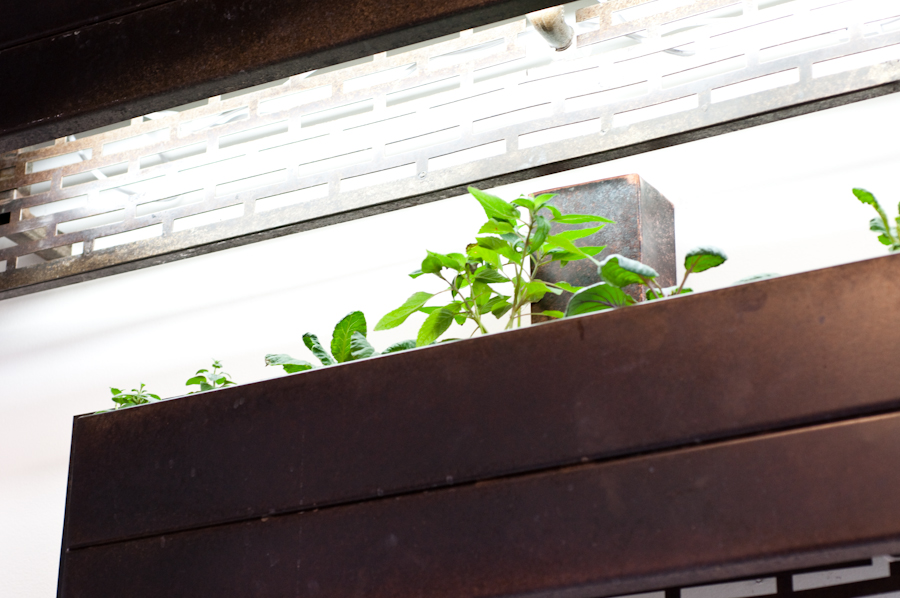 For more photos from the interview, visit http://staceyviera.zenfolio.com/mixtgreenschefinterview

They say that necessity is the mother of invention. In the case of Andrew Swallow and his business partners – his sister, Leslie Silverglide and brother-in-law, David – they were inspired to “revolutionize fast food” while traveling together and realized they had few, if any, healthy eating options on the road.

Swallow wanted to start a quick-service restaurant offering nutrient-rich meals, and the Silverglides wanted to do make the establishment “as green as possible.”

Five years later, they’re achieving their goals one restaurant at a time, with nearly a dozen Mixt Greens locations in San Francisco, Los Angeles and Washington, D.C., so far.

I can get a salad anywhere, so what makes Mixt Greens special? Swallow said, “I use produce that’s in season and keep the product intact as much as possible to let the natural flavor be the hero on the plate.” To that end, much of what is served at Mixt Greens is raw, since he likes “the food to speak for what it is. We add herbs and salt to enhance the flavor of potatoes,” he said, giving me an example, but emphasizing that he doesn’t like to cover up the natural flavors.

What Swallow said sets them apart from others in the crowd is that they use mostly organic and natural foods sourced locally. About 75 percent of the restaurant’s offerings are seasonal, and much of the protein and produce come from neighboring states. Swallow classifies “local” at about a 300-mile radius, a similar number to that which other chefs have estimated.

To keep products like tomatoes on the menu when they’re out of season or when a crop doesn’t do well, Swallow said they use techniques such as fire roasting and then preserve the tomatoes in olive oil and salt.

Bottom line, he wants to bring people the “most amazing fresh product.”  The product is definitely tasty. At the 1200 19th Street location in Northwest Washington, I made my own salad with baby spinach, jicama, dried cranberries, shelled soybeans, pumpkin seeds and turkey roasted in-house. Swallow also sent me home with a “Cowboy” salad, and if you told me a few days ago that I’d really enjoy a spicy salad, I would’ve laughed at you. But, man, it was tasty. The Cowboy is served with a tangy, sweet chipotle honey drizzle atop romaine hearts, herb marinated grilled chicken, roasted red peppers, black beans, sharp cheddar, and red onion.

The Cowboy is also filling, a factor that goes into the creation of every Mixt Greens salad. Between my hungry husband, Every Food Fits’ food taster, and me, it took two days to finish it. And if you like bread with your meal, Mixt Greens also offers sandwiches. Swallow’s personal favorite is the “Lil’ Piggy” salad, which contains lemon rosemary pork tenderloin on romaine lettuce with spring peas, pancetta, caramelized onion, Parmesan cheese, herbs, and a spring garlic vinaigrette.

The farm-to-table food movement took Swallow – trained at the Culinary Institute of America in New York – from his native East Coast to California. Tired of the intense nature of so many kitchens, Swallow started a business model that fostered “a place with a great dynamic where everyone likes to be here” while “revolutionizing” the fast food industry.

Swallow and his team started the business in 2005, and nationwide expansion plans are in place to first penetrate big cities and then dense urban areas. Such markets are teeming with save-the-earth hipsters who buy into Mixt Greens’ eco-friendly mantra, right down to their compostable take-out cutlery.

When I asked Swallow, “How is organic sustainable?” he quickly answered, “It isn’t.” Since the organics market is small, Swallow said, Mix Greens tries to use natural ingredients when organics aren’t available or affordable. Make no mistake: eco-friendly as the company is, it’s still a business. And a business exists to turn a profit. That’s a factor when deciding which asparagus to purchase, for example, as organic sources can cost up to three times that of conventional. Prices for produce are always changing, too, as, “Mother nature drives product quality and prices,” Swallow noted.

In urban areas, composting isn’t common – well, unless you live in Mixt Greens’ hometown of San Francisco where it’s mandatory – so Mixt Greens is working to send compostable items to a center within the city limits. There, the disposable napkins, forks, carryout containers and more will be turned into water. The California shops convert about 90 percent of their waste to compost.

But since you read Every Food Fits for the food and nutrition info, let’s get back to that. Swallow said he was a “total food junkie, especially hamburgers and fries.” He was overweight and decided to change his eating habits a year and a half ago, losing a substantial amount of weight.

Eating right doesn’t mean that you can’t eat well. Check out Swallow’s new cookbook, Mixt Salads: A Chef’s Bold Creations, releasing April 27. I’m swooning over the beautiful photography, seasonal cooking tips, and recipes. And did I mention the beautiful photography?  You can get an advance copy, too, if you’re one of the first 150 people to show up at a Mixt Greens location on Earth Day, April 22.

Echoing our blog’s mantra, Swallow ended the interview stating, “Diets don’t work. This is a lifestyle choice of how you eat on a daily basis.” See? We told you so!

For more photos from the interview, visit http://staceyviera.zenfolio.com/mixtgreenschefinterview