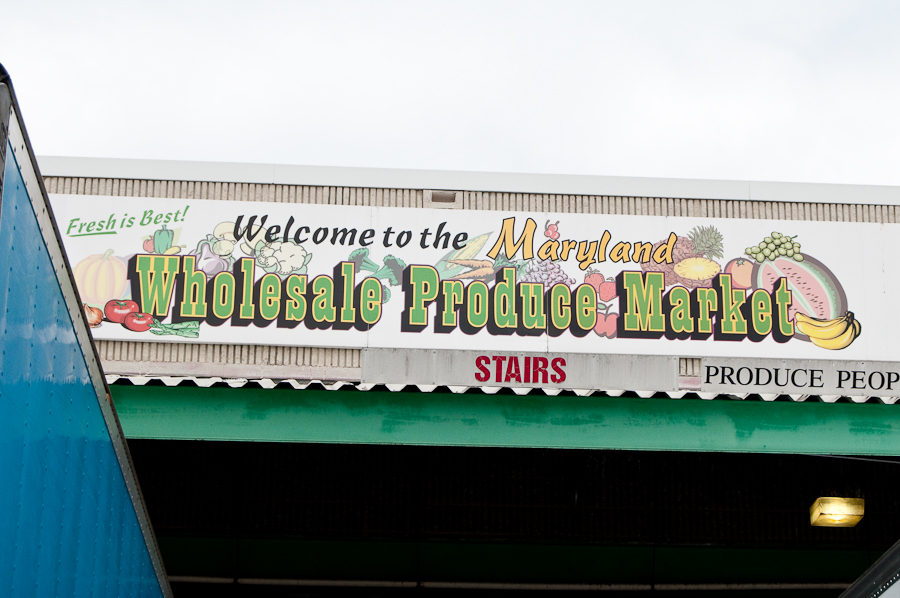 Where does our food come from? A popular question these days indeed. Our fruits and vegetables come from farms, that much we know in the most abstract sense, but who gets that produce to supermarkets and restaurants?

The answer is: people like those with the Tony Vitrano Company in Jessup, Maryland. Founded in 1932 by Tony Vitrano, a Sicilian immigrant with a second-grade education, the company is a privately owned wholesale supplier to the foodservice and grocery industries in the Baltimore-Washington metropolitan area. As the market is open to the public, they also serve consumers looking for a good deal on bulk fruit and individual chefs picking out what they want for their menu each week.

We visited the Vitranos’s distribution and storage units in the Maryland Wholesale Produce Market, the result of a 1976 consolidation of the four Baltimore produce markets, two of which stood where you now find the developed Inner Harbor and the stadiums at Camden Yards. Early on a Tuesday morning on the grounds of the 330,000 square foot market, we learned about how the Vitranos supply the region with more than 200 varieties of healthy fruits and vegetables.

Well, we thought 9:30 a.m. was early, anyway. Norman Vitrano, one of Tony’s two sons who inherited the business, told us that three hours prior to our visit, the place was a madhouse. And forget Monday or Friday – there’s no time to do anything but fill customer orders.

Standing next to crates of apples, our noses turning pink from the cool temps in the refrigerated warehouse, Norman explained, “The first guys show up at 8 p.m., loading up trucks, and the last guys leave at 6 p.m. It’s essentially a 24-hour business.” The work done during the day consists of phone sales and orders.

Recounting his own experiences and lessons learned from his father, Norman said that produce distribution was and is a sunset-to-sunrise business because farmers would harvest during the day and, because there was little or no refrigeration decades ago, buyers got the product back to the store before the sun came up or it would go bad.

Norman recalled that one of his father’s favorite sayings was, “Ice boxes? I call ‘em funeral boxes. Don’t store it.” Refrigeration is a modern stay fresh necessity, but the Vitranos’s belief – and conventional wisdom tells us – it’s best to sell it, not to store it.

Tony Vitrano worked in upstate New York digging up celery after emigrating to the U.S. from Sicily, Italy. He then worked in the packing plant for the celery company. His philosophy was to be the first person into work in the morning, the last to leave and work harder than anyone else. This attitude resonated with management, and the owners asked him to move to Baltimore to run another celery plant.

After working hard for that company, he decided to go out on his own and started a celery company out of his basement on S. High Street. “Little by little, he started adding other items,” Norman said.

Tony Vitrano eventually split the business into separate fruit and vegetable departments and gave each to his sons, Norman and Justin, respectively.

Tony shared more with his sons than a successful business: his intense work ethic. “I did all the dirtiest jobs here,” Norman recalled. “When friends were out playing softball, I was here working. My father said you should know how to do the job of every employee in the company. Sometimes you have to stand in for an employee or show them how to do it if they’re not doing it right.”

Modern methods have changed the business in significant ways. Nowadays, forklift drivers are seen wearing gloves, but when crates were packed fruit-by-fruit instead of pallet-by-pallet, Tony Vitrano wouldn’t allow gloves to be worn because he wanted employees to touch the items to ensure that damaged produce did not make its way to the customer.

In keeping with Tony’s philosophy that nothing should be thrown away, edible items that can no longer be sold are given to food banks that come to pick it up.

“It’s great to make a living selling a product that’s healthy,” Norman said. “My father was a man before his time. He said to eat fresh fruits and vegetables to stay healthy. His focus was on promoting fresh fruits ad vegetables as an industry, not just his company. I wish my brother and I were as smart as our father.”

All ordering in the business is based on guesswork, and the team needs to figure out a week ahead of time what customers will need. With an adamant expression, Norman noted, “This is not for the faint hearted.”

Since the produce is held in storage for such short periods of time, a fresher product is available. This equals more nutrient rich fruits and vegetables on your table.

The Vitrano Company deals with the basics in fruits and vegetables, which surprisingly does not include bananas or tomatoes. We learned the temperature requirements for these two items makes them more of a specialty product. We also learned a little lesson about produce pricing. Often times the best produce – fresh, in season, flavorful – is offered when the prices are low. Prices rise when supply is low and growers may be sending whatever they have to offer, even if it’s not in peak condition.

The Tony Vitrano Company is truly a family business, according to Norman. Currently three of Tony’s children (Justin, Norman and sister Verna) and four of his grandchildren are full-time employees, as is Justin’s son-in-law. Several of Tony’s great-grandchildren have helped fill in during holidays and breaks from school or when the company is short-handed.

To grow the business, the company started offering a nationwide fruit delivery service in 1995 called Fruition Gifts. Clients include individuals looking for healthy, delicious gifts for baby showers, birthdays and other occasions, but the fruit boxes have also gained popularity with offices that want to provide employees with healthy snack options.

Norman’s daughter, Dorothy Vitrano – the woman who answers to “Hey, Fruit Chick!” or “Hey, Fruit Lady!” – manages this portion of the business. “The best part of my job is being a resource – through our newsletter, blog and Facebook – for people who are trying to eat more healthfully.” You can also follow the “Fruit Chick” on Twitter.

Regarding the family business, Norman quipped with a laugh, “My brother said, ‘we have to hire family, we can’t afford anyone else. Pay ‘em less, appreciate ‘em less.’” But after more than 70 years in business and with more than 30 employees, something tells us that the Vitranos appreciate them more.