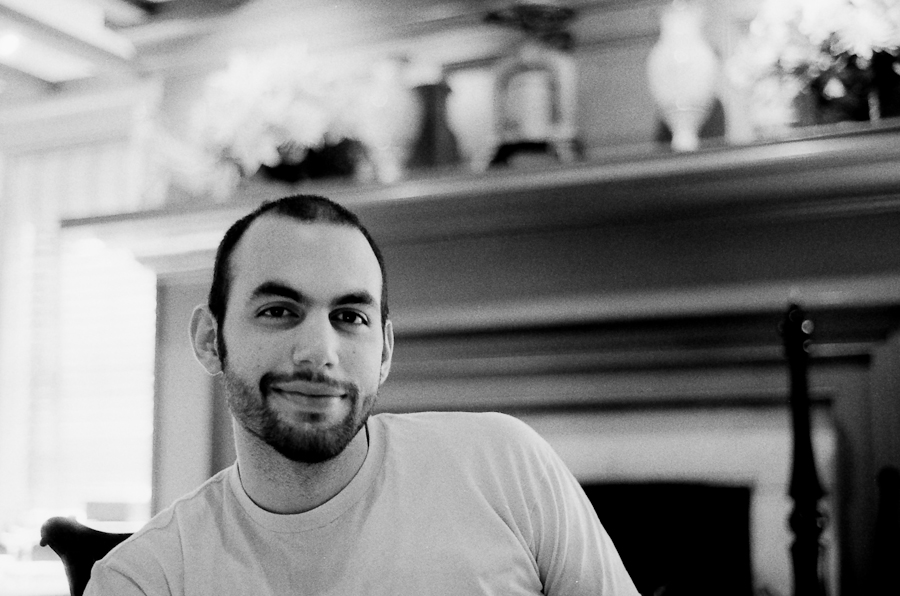 The first time that I went to 1789 in Georgetown a few weeks back, I didn’t know what to expect. I knew of its reputation as a Washington institution owned by Clyde’s Restaurant Group and that I had to dress up a little.  I heard the food is phenomenal and that dessert is not to be missed. Those final two expectations are what motivate Executive Chef Daniel Giusti to strive for perfection in the kitchen each night.

Following my fine meal at 1789 – weeks later, I continue to recount the tale of how I fell in love with morel mushrooms that night – I expected to come back for a formal interview with Giusti, meet him dressed in his chef whites and talk about food.

But in the restaurant housed in a historic Federal-period building, we sat at one of the tables most often requested by 1789 diners near the fireplace in the elegantly appointed John Carroll Room, Giusti in a pink t-shirt, jeans and pink-and-gold sneakers with hot-pink leopard-print laces.

Relaxed, sitting back in the comfortable dining room chair, Giusti started talking. “People can be intimidated by the atmosphere.  Old school fine dining restaurants can be very pretentious,” particularly French establishments, he said.  But there’s a wave of American restaurants run and owned by chefs who are “simple people who just like to cook.”

Giusti had just returned from the James Beard Foundation Awards in New York City. He ate his way through Manhattan – I know this because I follow him on Twitter – leading up to the awards dinner where the celebrity chef to end all celebrity chefs, Tom Colicchio, took home the Outstanding Chef Award.

I had just read this piece by Kat Kinsman on CNN.com that quoted Colicchio saying, “Most of the better restaurants out there — even if they’re high-end — are usually not snobby and pretentious. It’s the restaurants that are trying to be like that that get it wrong! The root of dining and hospitality is taking care of people.”

So with this topic and Colicchio’s comments fresh on both of our minds, Giusti said, “Food is about expectations. I don’t like the term ‘fine dining.’ It’s so stiff. I refer to [what I cook] as ‘fine food.’ I don’t feel like I have a right to brag and don’t think of my position as prestigious.”

Well, I would. Even though I believe that “age ain’t nothin’ but a number,” the fact remains that Giusti is 25 years old and was recently nominated for Chef of the Year by the Restaurant Association Metropolitan Washington for heading up one of Washington’s finest kitchens. He estimates that “80 percent of people come in for a special occasion.”

On that note, he said, “In trendy places, when you go out to meet friends and are distracted by conversation and atmosphere, people get away with a lot when it comes to the quality of food and the service. But at 1789, people come for a great meal, to be served upon in a great setting.”

Like his clientele, Giusti doesn’t want to go out to eat and be disappointed. Remember, he said that food is all about expectations. “I love McDonald’s. I like it for what it is. I get the same cheeseburger I got as a kid and it’s exactly the same,” he explained passionately. “People are surprised when I tell them this, but I want to know who is too good to eat at McDonald’s?”

I’m smiling on the outside, laughing out loud on the inside, because the day before our interview, I thoroughly enjoyed a Quarter Pounder with Cheese and Mickey D’s fries. Then Giusti asks the sarcastic rhetorical question I’ve often wondered about when I hear people criticize the Golden Arches: “Where did you grow up?”

While 1789 is about as far as one can get from McDonald’s, we did talk about how people are now more cognizant of spending habits because of the recession. “We bring in the best stuff that we can find trying to get the price point lower and provide value.” Therein lies the challenge when “all of the ingredients on the plate are really special, like our EcoFriendly Foods pork with Rancho Gordo heirloom beans.”

Giusti and Clyde’s build relationships with the people who provide the best products in the world to bring Washingtonians the best dining experiences.

“It’s nice to know where stuff is coming from,” Giusti said, talking about how he recently met with the producer of Pornanino olive oil, who was in D.C. from Italy and his Virginia pork producer, Bev Eggleston. “When you get a certain product from a specific place, you want to know what is the right way to grow this, what’s the right way to slaughter a pig. The best way to learn these things is to meet a producer. Asking them questions.”

Giusti surrounds himself with suppliers who are experts at providing exceptional products that he is proud to serve, as “service is about confidence.  What I tell servers and everyone else on staff is to be confident enough that you’re relaxed.” He said that great chefs such as Colicchio, Thomas Keller, Danny Meyer and others paved the way for him to cater to customers who appreciate that 95 percent of their produce comes from neighboring states through Tuscarora Organic Growers and enjoy specialty foods such as heirloom beans and eco-conscious pork.

Giusti noted that building such relationships is more expensive, but it’s worth the effort. “Doing things in an old-fashioned way takes more man hours. I’m truly passionate about food, cooking food, and I like to buy the product from people who are passionate about what they produce.”

“If I could be at every table,” Giusti said, “I could get people excited about the food. I get frustrated when people don’t understand why I’m so passionate!” With monthly cooking classes, Giusti has the opportunity to educate the customer. “When you educate people, they appreciate it so much more. They put 2 and 2 together.”

It’s also a way to get a younger crowd in the door that might otherwise be intimidated by 1789’s stately décor and dress code.

The latest class at 1789 was about seafood. “In class, we go over what questions to ask,” Giusti said. “Ask, ‘Can you cut me a fillet from a whole fish?’  Get into a conversation with [the fishmonger].”

Beyond sourcing fish, Giusti shares cooking tricks while the group makes dinner, and the genius of this next tip blew me away. Insert a cake tester in the fish – this works particularly well for a swordfish or tuna steak. The fish is cooked through when it slides easily through the flakes, with no resistance felt layer by layer. Giusti also recommends cooking food “at 300 degrees or lower if you have the time. It’s easier to overcook food with high heat.”

Like many chefs, Giusti is anti-recipe. “I like to teach people techniques because when your skills are limited, you’re limited in what’s right and wrong.” In other words, if you don’t have the know-how, you won’t be as successful at fixing an error. Giusti went on, “The problem with recipes is that temperatures and times are all different in each kitchen. Food is all preference. My palate isn’t the same as everybody’s.”

But his philosophy about food – and perhaps, life, too – is something to which we can all probably relate. “For me, we make good food and eat it. It’s instinctual and comes from experience. I’m 25 now. I need to work my ass off to get at a high level. There’s a lot to learn, and each day you find out how little you know.”