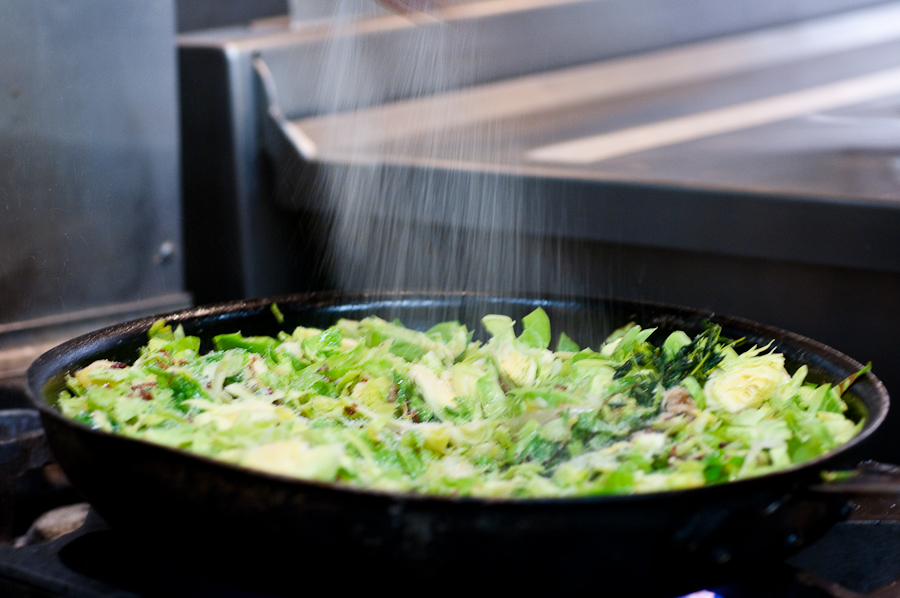 Welcome back, dear readers! Did you make Clyde’s famous chili or one of these other tasty recipes while you waited on pins and needles for us to post the second part of our interview? “Go stuff a sock in it,” you say? Ahem. Well, then, on with the post. (Here’s Part I in case you missed it.)

OK, enough science. Back to the food. Here’s the part of the interview where the chef reveals his secrets! Maldon Salt is a flaky, crystalline sea salt. Stickel explained that because Maldon is so flavorful, “I use a lot less salt when seasoning a dish.” For people who are looking to reduce the overall amount of sodium they consume without sacrificing flavor, using Maldon to finish a dish is one way to do that.

Besides, Stickel added, “When you have great produce or meat, I don’t like to cover it. I cook very simply” to let the natural flavors shine. Stickel did a demo in the kitchen to show me what he meant. He sliced an off-season tomato, drizzled Tuscan olive oil and sprinkled it with Maldon “finishing salt.” It brought out the texture of the tomato and enhanced the flavor of the fruit.

Oh, and that olive oil. Stickel named olive oil as one of the most misunderstood ingredients.  The otherwise reserved and laid back interviewee, Stickel started to open up when questioned on the virtues of the oils. “Olive oils are like wine to me. Just like wine, you have some that are peppery, others are fruity. I have 15 types in my home kitchen. You finish food with it, you don’t cook with it. Try a Tuscan olive oil. Unlike wine, you want the most recent vintage. It will look more green.”

Our interview was interrupted – a few times – by a Clyde’s executive waiting for a meeting to begin in the corporate offices located above the restaurant. Perhaps “interrupted” isn’t the right word. More like our interview was enhanced by his presence. Our casual, brief, off-the-record conversations provided an opportunity for me to catch a glimpse of the qualities that make Clyde’s such a welcoming place, for diners and employees.

Watching the exec interact with his employees reminded me of one of the first lessons I learned as a Capitol Hill staffer, which is “it’s from the top down.” Meaning that the leadership, whether it is a Congressman or a corporate VP, sets a positive or negative tone for the entire organization. It became apparent very quickly that the owners and leaders of the restaurant group cultivate a warm environment. It is this customer service-oriented culture that has helped sustain the company for over 47 years. Plus, the food is pretty darn good.

One thing I did not know – and something my Grandma Tillie is going to love to hear – is that Clyde’s shares its recipes with diners. According to Bridges, “I get four or five recipe requests a day.” But it can be challenging to fulfill requests for recipes because in the restaurant “we typically make things in gallons versus cups.”

Stickel didn’t hide his aversion to e-mailing recipes to diners. “I don’t cook to recipes. I work with ratios. It’s more about tasting, [figuring out if I’m] looking for a different acidity or flavor. We work from the hip.” He added with a wry grin, “There’s no giant recipe book that we work from.” Don’t worry, Chef Brian. Grandma Tillie doesn’t have access to e-mail. Yet.

For diners who like learning how to make new recipes, Stickel reveled at the Internet as a resource for home cooks who can search for different recipes for the same dish to figure out which combination of ingredients works for them.

We finished up our chat on the topic of what it takes to work in the restaurant business. I marveled at the thought that in just seven or eight years, I’ve gone from not being able to make much more than boxed macaroni to whipping up a delicious meal – sans recipe – with just a few ingredients from the cupboard and fridge. But to say my at-home kitchen skills would translate to a job in the restaurant industry would be like saying that training a cat to use the litter box also qualifies me to be a lion tamer. So really, what does it take to be able to work in the kitchen?

According to Stickel, “You have to be extremely dedicated…during the [January 2010] blizzard, [Clyde’s of Georgetown] stayed open the entire time.” He then thought back over the years and coming up through the ranks in the kitchen to achieve the position of executive chef. “It’s hard to watch your family enjoy a holiday, but you’re missing it because you’re cooking at work.” At the same time, Stickel notes, “I love what I do.”

To view more photos from the interview, visit http://staceyviera.zenfolio.com/clydesofgeorgetownchefinterview