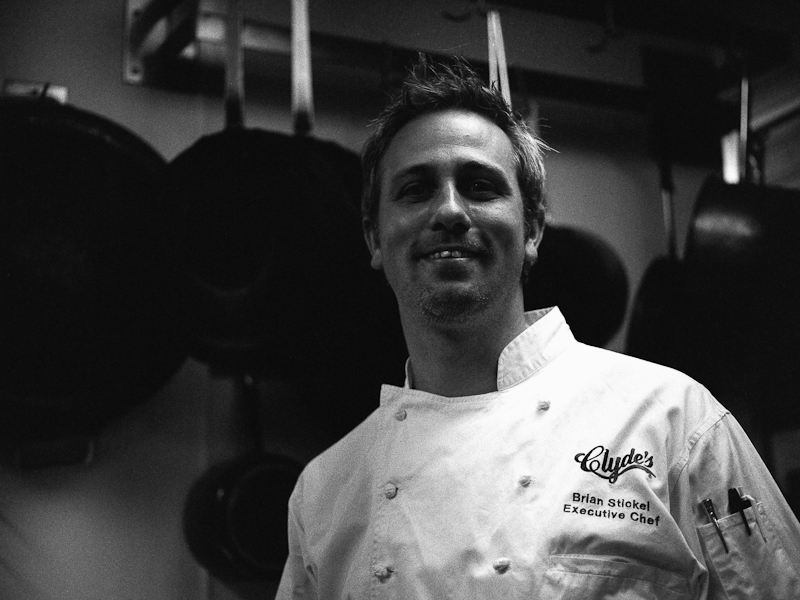 [This is the inaugural post for a new column at Every Food Fits about the people who cook the meals we enjoy outside of the home and the role nutrition plays in their lives and kitchens.]

“Never trust a slender chef.” That’s one of my two Rules. (The other Rule? “Careful when you’re in a position to trust a man who uses a blow-dryer on his hair.” More on that some other time.)  Yet there’s an exception to every rule. And the exception to this one is Brian Stickel, executive chef at Clyde’s of Georgetown.

We sat down at a small table in the cozy, wood-lined Back Bar, just off the bright Atrium Dining Room at the tail end of the lunch rush. It had been at least a year since I’d seen Chef Brian – we used to live in the same building – and it would be the first time we’d discuss food. I’d never asked him about cooking before because, really, how many people like to bring their work home with them?

In the 15 years that he has been a chef, Stickel has learned how to eat well and eat smart. He focuses on balance and lives the “calories in, calories out” mantra. “It’s my job to taste everything,” he said.  “I definitely eat in smaller amounts throughout the day, never three big meals.” In addition to exercising, Stickel maintains a healthy weight by eating healthy, filling food – usually a bowl of cereal with lots of fiber – before he arrives to the Clyde’s kitchen.

He’s also 6 feet 2 inches tall and a three-time marathon finisher, so those factors help account for his slender physique, but more than that, he says, “I don’t diet. I know I have to exercise because I have to eat a lot.”

I was relieved to hear this statement for two reasons. 1) It’s good to know that the pros don’t taste the food and then spit it out, unlike wine tasters (shame on them!); and 2) I like talking to people who possess common sense.

Stickel elaborated, “People confuse good nutrition with dieting. On my menu, I try to have something for everybody. It’s a well-balanced menu.” Clyde’s always features “tons of fresh vegetables. We get whatever is growing.”

Sometimes, “whatever is growing” is pounds and pounds of the same item, and Stickel’s team needs to figure out what to do with it. For a seasoned pro, the challenge is surmounted, but take heart, readers, it was not always so.

“When I was younger, it was more challenging,” he said. “It was like 100 pounds of asparagus comes in and you have to do something with it.”

From time to time, the Georgetown location will get a huge shipment of produce that must be used since the menu reflects what’s in season. Clyde’s Willow Creek Farm in Loudon County, Virginia, is an actual working farm tended by – you guessed it – a farmer, and when they have the occasional overabundance, they share the ingredients with other restaurants.

“They’re able to do more heirloom [tomatoes], herbs, vegetables. I personally will get stuff from time to time,” Stickel said. “We had a garden this year. I grow fresh herbs at home, and I usually bring in bunches of rosemary or other herbs to cook with” since Clyde’s of Georgetown does not yet have its own herb garden.

“Your diet will change over the year,” to reflect what’s in season, and that’s how Stickel cooks. Amy Bridges, Clyde’s corporate marketing manager, added, “The longer the season goes, the more you’ll see [certain ingredients featured] on the menu.”

We then discussed dietary trends and diners’ special requests. “The biggest request we get is related to gluten allergy,” Stickel said. “When I started 10 years ago, I saw this once or twice a year. Now it’s daily.”

He and Bridges emphasized the lengths that Clyde’s staff go to when preparing a meal for a guest with allergies. “When someone has an allergy [as opposed to a dietary request], I prepare the meal from scratch myself,” Stickel said, his expression serious.

Bridges added when it comes to working with allergies “we do an excellent job. There are procedures in place to take care [of guests who have food allergies]. It’s helpful to call ahead if you’re allergic.”

Next on the list of health-related topics, we discussed salt. Because of all the hullaballoo regarding heart health and sodium in recent years, it was surprising to hear that few diners come in requesting low-sodium dishes. Stickel noted, “many sauces and parts of dishes are prepared beforehand, but salt can be removed from some dishes. Alternatives to seasoning with salt are spices and acidity. Those can also be used to enhance flavor.” But salt continues to hold the top spot among his favorite flavoring ingredients.

Stickel was quick to cite a recent New York Times article about a scientific paper published in The Clinical Journal of the American Society of Nephrology. Nephrologist Dr. David McCarron and his team questioned whether sodium intake in the United States could be affected by public policy and whether policy recommending that adults reduce salt consumption is appropriate. Food for thought. (Pun intended.)

Tune in tomorrow for the exciting conclusion to our interview with Clyde’s of Georgetown Executive Chef Brian Stickel! In the meantime, make Clyde’s famous chili or one of these other tasty recipes!

To view more photos from the interview, visit http://staceyviera.zenfolio.com/clydesofgeorgetownchefinterview